What is an Lighting Equipment?

A semiconductor device that emits light by running current 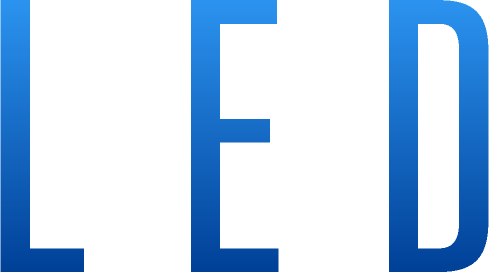 Lifetime※Values shown do not represent the estimated life of individual LED elements and are not garanteed.

Due to its very nature, an LED will not completely cease lighting up, unlike an incandescent lamp which will no longer light up once the filament wears out.
However, over time the LED’s light transmission rate will decrease and its light flux will degrade due to the degradation of the LED chip and the resin that seals the chip. Accordingly, the life of an LED is defined as the time it takes for LED luminance to decrease to 50% of initial luminance at an ambient temperature of 25°C; not the time it takes until the LED no longer lights up.

This definition of LED life also applies to LED lights with LED elements mounted.
The LED life time of required brightness is different depends on the customers from what percent of brightness is required compared to the initial. It may be said that it is the “past life”when it is 20% down from the initial brightness for those who think present brightness is just enough.

For the customers satisfied with 50% luminance of the light capacity in the initial stage, luminance decreased to 50% of the initial value may be considered to be still usable since required luminance can be maintained by increasing power supply as the luminance decreases.
Accordingly, we cannot uniformly define the life of light.

Green (555nm) is good most sensitive, the human eyes are opposite the green in applications such as visual inspection.
However, in the image processing, even lighting that looks bright visually, can be dark in the image of the camera. You also need to consider the compatibility of the illumination wavelength and peak sensitivity characteristics with the individual camera.
The image is brighter when illumination wavelength and peak sensitivity of the camera are close. 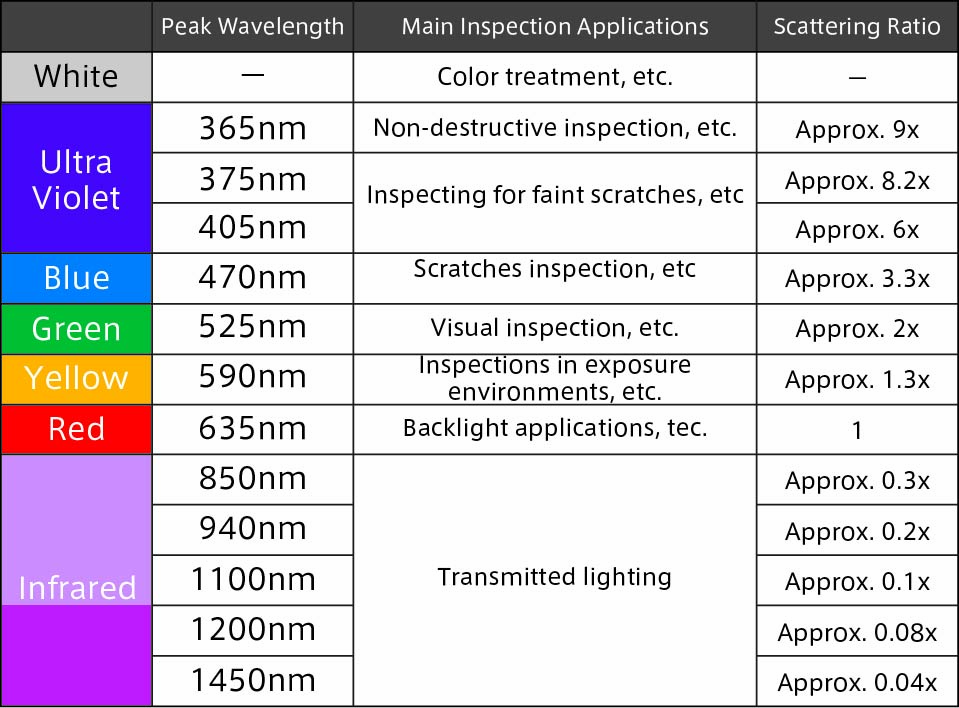 ※The scattering ratio is inversely proportional to the 4th power of wavelength.
※Described wavelength is for reference only. There are some LEDs which does not fit in the above cases.

Comparison of Wavelength and objects

Whereas ordinary lighting is designed to make things brighter, in the field of image processing, lighting plays the key role of emphasizing only the areas of a subject that are of interest and capturing optimal images. Light bulb The color relationship between wavelength (lighting color) and objects, taking into account the relationships of typical complementary colors, is shown in the tables below.

※The above tables depict a typical example only and may not be applicable depending on work characteristics (reflection, transmission, and absorption), and camera and lens (optical system).

Reflection and absorption of color

The selection depends on the type of Lighting Equipment.

Controlling the brightness by changing the pulse width.

Controlling the brightness by changing the voltage.

Getting the most out of Lighting Equipment

Do not use Lighting Equipment in high-temperature environments as doing so will speed up the rate at which luminance decreases and elements degrade.

To mitigate loss of luminance and degradation due to heat.

Lighting Equipment units should be moved as close to the subject as possible.

IMAC products are primarily designed for use with image processing and industrial inspection applications. This warranty shall not apply to use under circumstances like those outlined below:

*The above values are typical values and do not apply to all products.
Read the instruction manual carefully before use.

We contribute to the society as a research and development company, and construct an environment management system based on the policy below.

As a regulation on the use of chemical substances related to the supply of environmentally conscious products, the revised RoHS (RoHS2), which restricts the use of six hazardous substances such as lead, was replaced with (2011/65/EU) on July 21, 2011. It has been implemented and operated since January 3, 2013.
Furthermore, the addition of four phthalic acids and timing of its application were stipulated as the additional item (EU)2015/863 on the revised RoHS directive that was promulgated on June 4, 2015, and will be applied from July 22, 2019.

Our LED lighting equipment and their drive power supplies either fall under the monitoring and control equipment of the revised RoHS directive’s category 9 or electrical equipment not covered under other categories. Our standard products listed in the catalog (with some exceptions) are made compliant with the six substance use restriction under the revised RoHS (RoHS2), and they have been manufactured as “RoHS Directive (2002/95/EU) compliant products” since April 2007.
Under the revised RoHS Directive (EU)2015/863, the compliance deadline for the four additional substances is July 22, 2021 for Category 9 and the July 22, 2019 for electrical equipment not covered under the other categories.
We intend to end the of adaptation of these 10 substances, which includes the 4 additional substances, by July 22, 2021, and we will respond sequentially so as to satisfy the threshold value.

Chinese version RoHS Directive means “Measures for the Administration of the Restricted Use of the Hazardous Substances Contained in Electrical and Electronic Products”, implemented in China on May 1st of 2007. As well as RoHS Directive implemented in Europe, Chinese version RoHS Directive restricts the following 6 substances: lead, mercury, cadmium, hexavalent chromium, polybrominated biphenyl (PBB), and polybrominated biphenyl ether (PBDE). The directive obligates manufacturers and traders in China to show content information of the 6 substances in electronic information products. Content information of our products differs depending on products. Please check hazardous substance usage restriction marks in each page about products.

Restriction mark of use of harmful substance

Lighting Equipment is included in the scope of application for the IEC 62471 standard, “Standard Regarding Photobiological Safety of Lamps and Lamp Systems”, (Published by the International Electrotechnical Commission in 2006). Photobiological risk can be divided into the following risk groups based on the degree of photobiological damage caused.

We have judged that our Lighting Equipment and extension cables are not covered by US safety standard, the Safety Requirements for Electrical Equipment for Measurement, Control, and Laboratory Use-UL61010-1, 6.3.1 a, due to their use of voltage under DC 48V.

Although we have Lighting Equipment power supplies that meet the US safety standard, we do not plan on acquiring the certification as it is not mandatory.